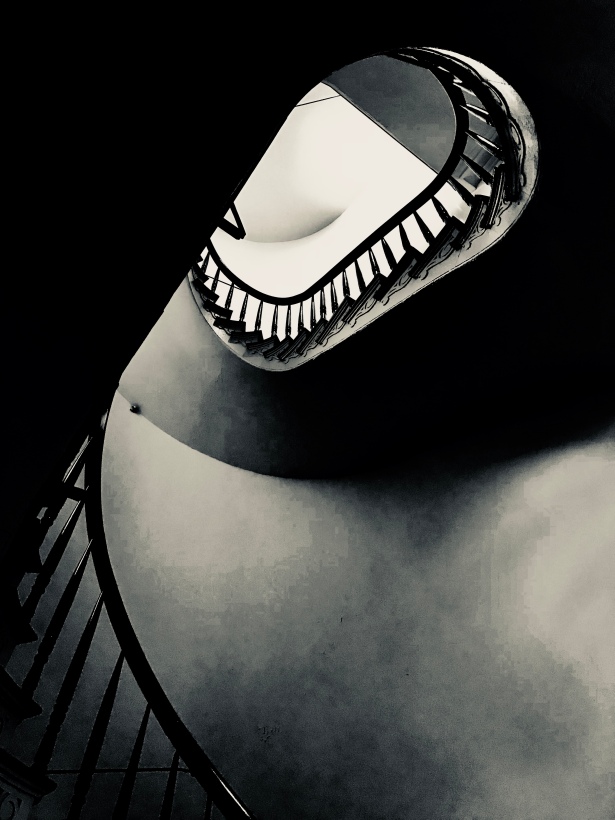 A bad viewing experience too good to be true.

“…this syndrome is a war that nearly every woman faces every day, a war within herself too, a belief in her superfluity, an invitation to silence…”
– Rebecca Solnit, “Men Explain Things to Me”

I’m not talking about opportunities for self-reflection or growth or a chance to be the bigger person.  I don’t mean a bad thing happening that somehow prevents a worse thing from happening (getting a flat tire and winding up not driving over a bridge that was destined to collapse, for example).

In this case, I’m talking about pure, uncanny art in motion.  This is what happened the night my husband and I went to see Unsane, the new uber-low budget Steven Soderbergh psychological thriller starring Claire Foy.

To set the scene, let me tell you about the film.

(I’ll try not to get too specific, but this is one of those films that’s better when you go in knowing as little as possible, so fair warning: Possible spoilers.)

Foy’s character, Sawyer Valentini, has recently uprooted herself from her Boston home without much warning to her friends and family in order to escape a frighteningly persistent stalker.  She’s, understandably, still very much on edge.  The camera angles, filmed entirely with an iPhone 7 Plus, are uncomfortable and intrusive, the distillation of the female psyche walking down a dark alley.

Her interactions with the world are raw and clipped, as one might expect, considering she’s been told it’s now her job to police every aspect of her surroundings.  In one flashback, she speaks with a consultant who suggests she vary her lunch hour every day, delete all social media, refuse to take pictures with friends, and stop using her attached garage in favor of the more visible front entrance to her townhome.

Basically, she’s been violated, and she is the one who’s expected to give up her freedom.

Does this sound familiar?

Like…girls being sent home due to dress code infractions that might “distract” boys?

Sexual assault victims being ostracized for “digging up the past”?

Rape victims being blamed for what they were wearing?

Self-defense classes being offered to women, rather than boys being taught to control themselves?

You get my point.

Nevertheless, Sawyer persists in her attempt at starting a new life in a new city with a new job.  Her guarded nature and lack of a familiar support system (She didn’t even feel safe telling her mother why she moved.) wear her down, and she does the smart thing.  She seeks professional help.

She schedules an appointment with a counselor.  Someone to talk to.

Her first session seems to have gone well, from her perspective, but before she heads back to work, she’s given another stack of paperwork to fill out.  “Just boilerplate,” the lady at the desk calls it.  She skims it, fills it out, and hands it back.

And she’s asked to wait.

It quickly becomes clear that the forms were far from boilerplate.  She’s told that she’s just voluntarily committed herself, a step they deemed necessary due to some red flag answers to questions about suicidal ideation in her counseling appointment.

From here, things get dark.

Thanks to the papers she unknowingly signed and layers of hospital red tape, her word and voice in her own treatment is fatally compromised.  Think bureaucratic Gaslight.  Every argument and frantic outburst only makes the authorities more certain they’ve done the right thing.  She’s surrounded by both unstable individuals and other patients who feel they’re in the same compromised position she is.  In the medicated dimness of the observation ward, it gets harder and harder to tell which is which.

And then she sees her stalker.  Working under a new name as an orderly in the hospital.

Her worst nightmare—the man who wants nothing more than to control her every moment is actually in charge of her.

The rest of the film follows her attempts to escape and takes us down the rabbit hole of whether or not her perspective is reliable.  It’s far from cut and dry, but I feel it’s worth considering the current climate of “me too” and amplifying female voices that this movie was born in.

My takeaway from one of my favorite moments near the end of the film:

Being a powerful woman in today’s world means always carrying a steak knife.

So, definitely go watch the film and make your own decisions about the plot.  Then re-check those decisions based on your gender and whether or not your father told you how to break a man’s nose with your palm when you were a little girl.

Now, back to my perfectly imperfect viewing experience.

My husband and I went to one of our favorite local theaters, a cinema with comfy reclining seats and Indian owners who play Bollywood films alongside the current American hits just because they can.  We like it because it’s usually not crowded, and we can pick our seats online.

It’s a late-night showing of a pretty niche movie on a weeknight, so the theater isn’t crowded.  At first, it seems like we’ll have our row to ourselves, but about five minutes into the film itself, another couple show up and sit down next to me.

I know how it is to be late to a movie, so I ignore them noisily deciding to swap seats, thinking they’ll settle in eventually.  They continue whispering, which somehow leads to the guy trying to tickle the girl.  Keep in mind, these aren’t teenagers.  I’m guessing they could easily be in their thirties.

Whatever.  I’m too much of an introvert to complain about whispering.  I roll my eyes at my husband.

But it gets worse.

The tense scenes are starting to build up, and the guy is starting to talk about them with his date.  Not in a “Can-you-believe-that?!” movie-whisper.  In basically his normal outside voice.  This starts to get on my nerves, so I give him a little courtesy shush.  Basically giving him the chance to remember the social contract, in case he just doesn’t realize how loud his voice is.  (Not an unusual problem among men.  I’ll call it vocal man-spreading.)

He ignores me.  The explanations get louder and dumber.

I shush louder this time.  I think he glares at me.

Then, in a pivotal moment of the film, he basically yells “OH MY GOSH THAT’S GOING TO KILL *character*!”  I needn’t mention this fact is blatantly obvious.

My husband, who is similarly frustrated, yells “SHUT UP!” at the same volume.

Mr. Mansplainer looks over like he’s been wounded and says “Sorry” at a volume that implies he definitely doesn’t mean it.

We watch the rest of the film in blessed suspenseful silence.

Don’t get me wrong, I love hearing a crowd of filmgoers gasp during a scary movie.  I don’t mind children getting excited during a superhero flick.  One of my favorite viewing experiences of all time was an entire theater cheering at the end of Get Out.

But this was no laugh-out-loud comedy or even a louder sort of scary movie.  It was a psychological thriller with quiet dialogue.  And the theater in question has a strict no disturbance policy.

What’s worse, the story isn’t over yet.

My husband likes to watch credits, so we stayed put after the final scene.  Mansplainer and his female friend get up and gather their things.  But before they leave our row, the guy walks up, puts his hand on my seat’s tray table, and leans over me.

He’d spent the rest of the movie stewing about how he was right.  About how he could get the last word.

How I wish I’d had a perfect comeback.  Like “Next time you have a public viewing experience and feel like talking during the whole movie, why don’t you grow up?”  (Or perhaps something more exotic.)

But I didn’t.  Because leaning over me like that felt pretty dang aggressive, and I was afraid to escalate things.  My husband chose to ignore the latter part of his statement, simply accepting his apology.

I made my husband wait until I was sure they’d be out of the theater and in their car before we left.

Basically, this man violated my viewing experience, and I felt like I had to stay out of his way to defuse the situation.

I asserted myself, and he chose to use it as an opportunity to teach me a lesson.

I hear echoes of Sawyer’s coworker in the opening scene, admonishing her for speaking firmly to a client.  “More flies with honey!”

I have to wonder…was he too busy mansplaining the movie to actually notice what it was about?

Anyway, thank you, Mr. Mansplainer, for putting this movie’s themes in such stark relief.  Your clueless discourtesy is a reminder that you don’t have to be locked in an asylum to be discredited as a woman.